Henna also know as Lalle in Northern Nigeria is a form of dye gotten from a plant that is used for body art, dying of fabrics, hair, leather etc.

However, its most popular use is for body art especially on the hands and feet.

I’ve always wanted to do henna but the opportunity didn’t come up till recently. Plus due to ignorance for the longest time I didn’t think just anyone could do it. Best part, I got to do it twice.

It’s important for people to do a small patch test first as some people react to it. Also ensure you’re using someone who knows what they’re doing. This is because sometimes, they use the wrong products which could lead to complications.

For my first henna, I did an elaborate design on my right hand and a small one on the side of my left hand.

When the henna is initially done, it looks very shiny and dark. After this, you’re advised to wait for at least 30 mins before washing it off. The essence of washing is because once the henna starts drying, the excess that hasn’t set into your skin starts to become scaly. Once you wash it, the design can be properly seen. 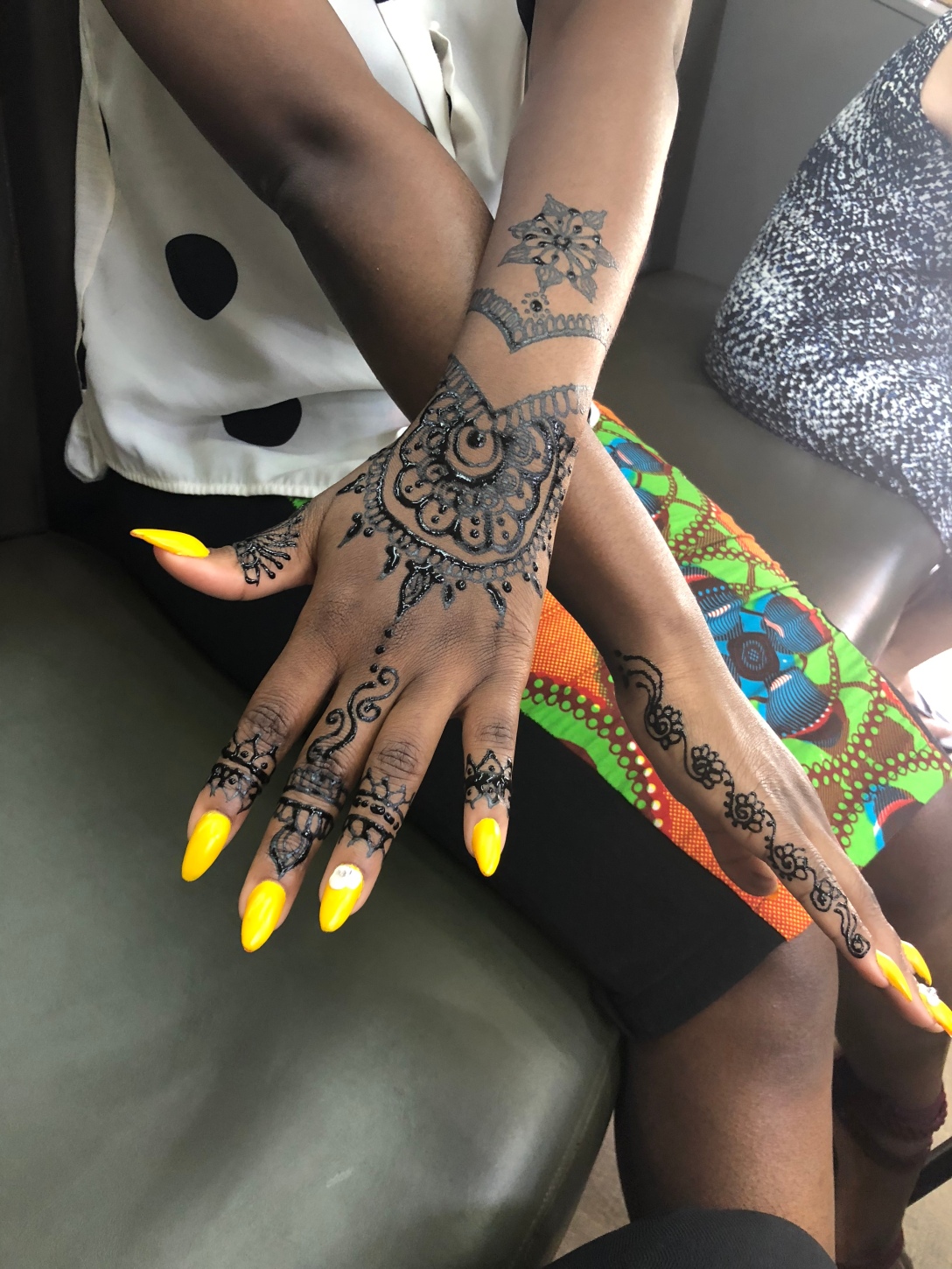 For this design I left it for about an hour. I read somewhere that scrapping it off was better than washing it. This took way longer and ended up messing up my floor so I wouldn’t advice this.

If you look closely you can see that because I scraped it off, some of the design was smudged and also it didn’t come out/look as nice. To be fair, the original black shine may have also been why I was biased but people loved it.

I got on social media that day and coincidentally some of my friends had gotten henna too but in different designs.

One got hers done in the North and the other in Lagos and they were just so beautiful.

Mary got hers on the back of her palm and I loved it so much that I attempted to copy it for my second one.

After a few days, my henna started to fade. I wasn’t sure if it was because I was using black soap, scrapped it or I didn’t leave it for too long.

The next time I got it done, I left it on for 2 hours before washing it off and even though someone bumped into me while it was drying, I think it came out alright. This one lasted me a little over 2 weeks. 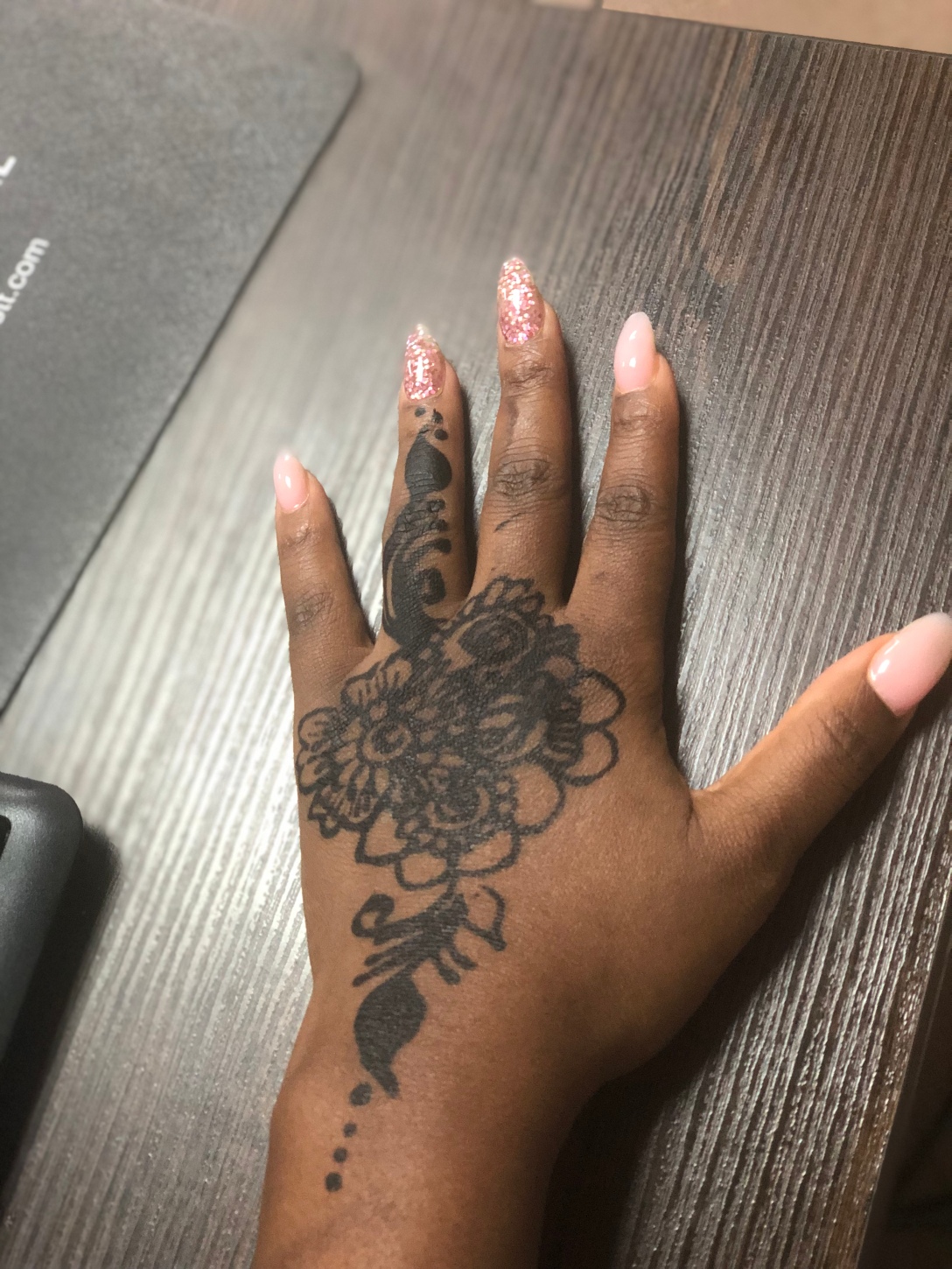 I got various reactions to having my henna especially in church. Some asked if I was getting married, if I was from the North and my favorite ‘why did you get a tattoo’?

I found it amusing that despite it being such a norm in the North, here in the South people were still skeptical about it with some even disapproving it. However I got more love than hate from it with some people even recommending I use the brown one next time as it tends to be nicer.

Another of my friends mentioned that while she was in the university, she had henna done quite regularly as in her opinion, it’s a form of beautifying ones body just like make up and after seeing mine, she was going to start again. (yayyy).

I was happy I finally got to do something I had always thought about and it my only little way help to educate people around me on the use of henna on the body. Considering so many women use it to dye their hair all over the country, it’s amazing that they don’t know its other uses.

EVER HAD HENNA DONE? WHAT ARE YOUR THOUGHTS ON IT!

*Reviews are based on opinions and personal experiences, and may differ from person to person

4 thoughts on “The Art of Henna | Northern Beauty”